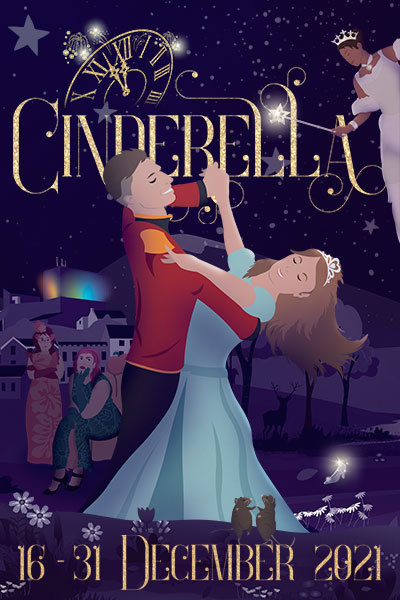 You shall go to the ball this festive season in Pembrokeshire!

You can expect plenty of fun, adventure, and laugh-out-loud moments in this Torch Theatre Company Production of the tale adored by generations.

Pembrokeshire’s favourite Dame, Dion Davies, returns as one of the Ugly Sisters, Eugiene, and the much-loved comedian and actor Dave Ainsworth takes on the role of the Pantomime Villain as Barron Hardup. The duo star alongside Haverfordwest based actor and singer/songwriter Rosey Cale who plays Cinderella.

We are pleased to welcome back James Mack who played the hilarious ‘Stanley Stubbers’ in One Man Two Guvnors. James plays Eugiene’s fellow partner in crime and the even more beautiful sister, Hygiene. Miriam O’Brien also returns to the Torch as Dandini. Her previous roles here include Sleeping Beauty, The Woman in Black and ‘Pauline Clench’ in One Man, Two Guvnors.

Making their Torch Theatre debuts are Milford Haven based actor and former Torch Youth Theatre member Samuel Freeman who plays the Prince, Carmarthenshire’s Gareth Howard as Buttons, Amelia Ryan who will play the Fairy, and the Torch Theatre's very own David Woodham as a Footman.

Don't leave it too late to book your tickets, you all know what happens after midnight...