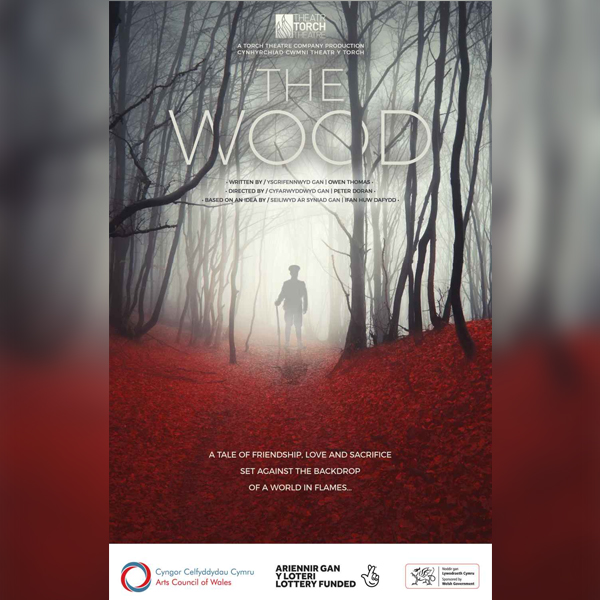 
The Torch Theatre has announced that its critically acclaimed production of The Wood has now been published on both digital and paperback formats. The First World War drama written by Cardiff-based playwright Owen Thomas was produced and taken to the stage at the Torch Theatre, Milford Haven, in February this year under the direction of Peter Doran, Artistic Director of the Torch.

Inspired by a true story and based on an idea by the actor Ifan Huw Dafydd, The Wood charts an old man’s journey back to Mametz Wood to fulfil a promise he made to his best friend who lost his life alongside him in 1916 during the infamous Battle of the Somme. A tale of friendship, love and sacrifice, The Wood is a poignant tribute to those who bravely lost their lives in the Great War.

Peter Doran said: “As we reach the centenary of the end of the war we are reminded of the awful statistics regarding the amount of people who gave up their lives; they are so horrific that it’s difficult to take in. With The Wood, we looked at a very personal story which we hope helped to put into perspective, what it meant to families losing loved ones and how it affects future generations. It’s wonderful that it’s now available in print so people can enjoy the wonderful poetry in Owen’s script.”

The Wood was written by Owen Thomas to mark the centenary of the end of the First World War. Both writer and director spent many hours researching, especially focusing on the personal stories of the Welsh soldiers who fought at Mametz Wood, a strategic objective of the 38th Welsh Division to drive German soldiers out of the wood during the First Battle of the Somme. Widley regarded as one of the most bloody battles of the Great War, almost 4,000 Welsh soldiers were killed, missing or injured in securing the position.

Owen Thomas added: “I was incredibly proud to be commissioned by the Torch Theatre to write The Wood. Ifan Huw Dafydd's original story was incredibly moving and powerful. I wanted the play to serve as a fitting commemoration to the many lives lost during World War One, in particular those lost by the Welsh soldiers who fell in the Battle of Mametz Wood. I am delighted that the play has been published and I hope people will enjoy reading it as much as I enjoyed writing it.”

The Wood is available now to buy in both digital and paperback versions from Amazon.co.uk and from the Torch Theatre’s online shop: https://www.torchtheatre.co.uk/shop