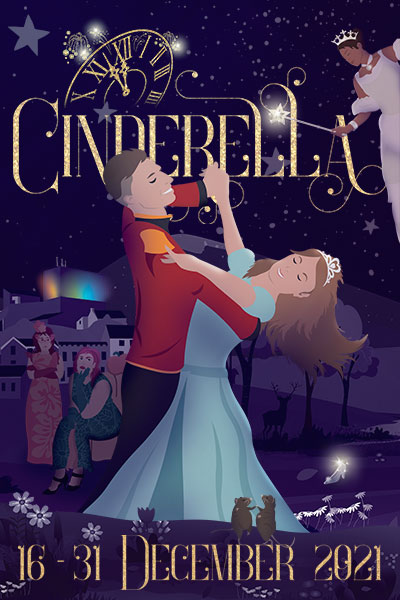 You shall go to the ball in 2021! The Original and Best Pantomime in the West is back at the Torch Theatre this Festive Season


The Torch Theatre Company are bringing live pantomime back to the stage in Pembrokeshire this December with their reimagining of the classic rags to riches fairy tale Cinderella. Like with all good pantomimes, you can expect plenty of fun, adventure, and laugh-out-loud moments. Cinderella is the perfect family treat promising to be full of magic, comedy, and mayhem.

Directed by Torch Theatre Company’s award-winning director Peter Doran, this year’s family friendly production sees some familiar faces return amongst an array of local Welsh actors. Pembrokeshire’s favourite Dame, Dion Davies, returns as one of the Ugly Sisters, Eugiene, and the much-loved comedian and actor Dave Ainsworth takes on the role of the Pantomime Villain as Barron Hardup. The duo star alongside Haverfordwest based actor and singer/songwriter Rosey Cale who plays Cinderella.

The production also welcomes back James Mack who played the hilarious ‘Stanley Stubbers’ in One Man Two Guvnors. James plays Eugiene’s fellow partner in crime and the even more beautiful sister, Hygiene. Miriam O’Brien also returns to the Torch as Dandini. Her previous roles include Sleeping Beauty, The Woman in Black and ‘Pauline Clench’ in One Man, Two Guvnors at the Milford Haven based theatre.

Making their Torch Theatre debuts are Milford Haven based actor and former Torch Youth Theatre member Samuel Freeman who plays the Prince, Carmarthenshire’s Gareth Howard as Buttons and Amelia Ryan who will play the Fairy. Amelia has recently graduated from the University of Wales, Trinity St David.

The Torch Theatre’s Artistic Director, Peter Doran, on the casting of Cinderella said:

“I’ve probably directed over 30 pantomimes during my career but my favourite has to be Cinderella! It has that extra bit of magic and of course, a double dose of Dames with the ugly sisters! I’m really looking forward to working with the great cast we’ve put together and creating a magical show for all to enjoy.”

Cinderella will be the Torch Theatre Company’s 177th production. The professional theatre company have been producing Christmas shows to Pembrokeshire audiences for over 40 years. For many in the local community the Torch Theatre Pantomime is a festive family event with many people booking over 6 months in advance for front row seats. During 18 months of closure due to COVID 19 restrictions, the Torch Theatre was missed greatly by its audiences, both young and old, particularly so during the 2020 festive season. December 2021 promises to be the theatre’s best pantomime yet and a spectacular fun-filled family show.

Executive Director Benjamin Lloyd on the return of pantomime added:

“For so many of us, the Torch panto has represented both our first experience of live theatre and a cherished tradition for all the family, and in Cinderella we have the show that truly has something for everyone! We are thrilled to be safely welcoming our community back through the doors of the Torch with the perfect opportunity to come together again in celebration after such a torrid time apart.”

Tickets are selling fast for Cinderella which celebrates a return to live family theatre at its best and showcases the wealth of local, professional talent in Pembrokeshire and Wales.

Cinderella runs from Thursday 16 to Friday 31 December at various times, including a BSL interpreted performance (Interpreter Liz May) on Thursday 16 December and a Relaxed Performance on Saturday 18 December. Tickets can be booked on 01646 695267 or by clicking here.

Don't leave it too late to book your tickets, you know what happens after midnight...