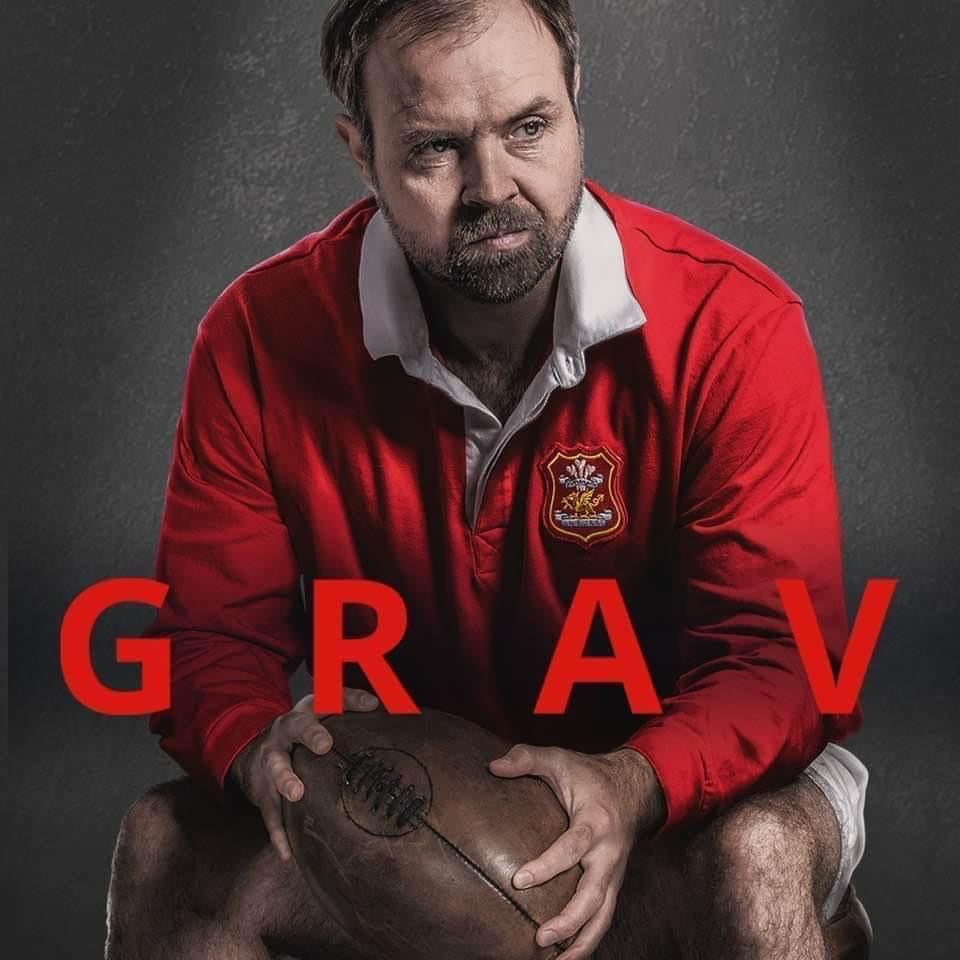 Feature length film of Grav to be screened on S4C


The Torch Theatre’s Award Winning and Critically Acclaimed production of Grav has been adapted for television as a feature length film and will be shown on S4C this Sunday evening. This is another incredible chapter in the Grav journey, a journey that has captured the hearts and minds of theatre audiences and rugby fans alike since it took to the stage in 2015.

The S4C film pays tribute to the life and times of Welsh Rugby legend and cultural icon, Ray Gravell, and will be aired on what would have been Ray’s 70th Birthday. The film, directed by Marc Evans (The Pembrokeshire Murders, Manhunt and Y Bomiwr a’r Tywysog), is based on the stage play, written by Welsh playwright Owen Thomas, that made its debut at Milford Haven’s Torch Theatre in 2015. Owen alongside the Torch Theatre’s Artistic Director, Peter Doran, (who also directs the stage play) have been involved behind the scenes in the development of the film. Gareth J Bale, who has played Grav on stage in over 100 performances continues the role of Grav on screen.

“There are elements of happiness and sadness in the drama, that is what makes it so special. You could imagine Grav saying it himself, that there were some players who wore the red jersey who were better than him – not many, but a few. But in terms of their life stories, there isn’t as much to tell, and Grav was certainly someone who wore his heart on his sleeve. The drama does look at some sad moments, moments which had a huge impact on him. But we also celebrate his life and there is a lot of comedy there too. There were peaks and troughs in his life, but that’s who Ray o’r Mynydd was.”

Since 2015, Grav has toured Wales five times, won awards both at the Edinburgh Fringe and Wales Theatre Awards, played at Ray’s home village of Mynyddygarreg, opened the 2015 Rugby World Cup in Rugby, and, in 2018 played in both New York and Washington DC. In 2019, Grav sold out 5 nights at London’s Hope Theatre, the first time the play had been performed in the English capital.

Writer Owen Thomas’s script was published in 2016 and the show has now been seen by tens of thousands, including a number of Ray’s team mates and rugby legends: Sir Gareth Edwards, Phil Bennett, Delme Thomas, Gareth Jenkins, Scott Hastings, Jim Renwick, Rupert Moon and JPR Williams, all of whom have given their seal of approval.

Grav is widely regarded to be the play that inspired the Welsh Rugby team to win the 2019 Men’s Guinness 6 Nations Championship, after being performed in private to the Welsh team and coaching staff including Warren Gatland in the away dressing room at the Principality Stadium ahead of their famous win over England. The play was due to visit South Africa in the summer of 2021 alongside the British and Irish Lions tour but was sadly postponed due to the global Covid pandemic.

“The play was meant to be in South Africa this summer, during the British and Irish Lions tour but sadly that had to be cancelled due to Covid; however, the disappointment didn’t last long as we were approached pretty much out of the blue for permission to allow an on-screen adaptation of the play. We were very clear from the start that Owen must do the script adaptation and the Gareth play the role of screen, this was also the wish of Grav’s Wife Mari and his daughters Manon and Gwennan. I’m looking forward to seeing how it adapts but it’s another chapter in the life of this incredible piece of theatre.”

Grav will air at 9pm on Sunday 12 September on S4C. It will be in Welsh with English subtitles available. It will also be available on demand through S4C Clic, iPlayer and other platforms.