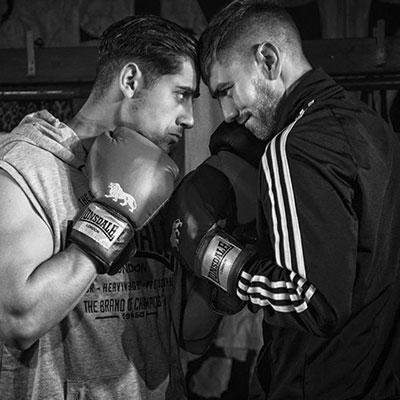 
This love story between two boxers, sees two men finding themselves, and each other, in the most unlikely of worlds. It is an unconventional story, where both men discover that the greatest challenge lies outside the ring.

In one corner is ‘Gorgeous’ George O’Connell: traveller, bare-knuckle fighter, hero to his people and Gypsy King. George leaves this life behind and enters the world of professional boxing, which puts him on a collision course with his roots, his identity and his greatest fear.

In the opposite corner, gay boxer Dane ‘The Pain’ Samson, the young pretender and son of a boxing legend. But Dane is fighting his own battles and they will ultimately lead to a tragedy that neither man could predict...

“Gypsy Queen is the very definition of great theatre”

“Heart-breaking, raw and highly emotional, this really is not one to miss”

“A slick, rewarding piece of theatre that offers fresh and surprising perspectives on the gay experience”

The subject of LGBTQ visibility and inclusivity in sport is a topic close to the heart of actor and writer Rob Ward whose previous award-winning one-man show ‘Away From Home’, co-written with Martin Jameson, followed the life of a rent boy in a relationship with a Premier League footballer. Touring nationally and internationally between 2013 and 2016, the show received two Manchester Theatre Awards (Best New Play and Best Fringe Performance).

Alongside Ward in this production is actor John Askew who joins ‘Gypsy Queen’ following a successful UK tour of the Richard Bean play ‘Harvest’ with New Perspectives Theatre Company. Having recently located to Manchester himself, Sheffield born Askew has experience of boxing from his earlier years so the gloves fit him perfectly!

Hope Theatre Company is a Manchester-based theatre company specializing in LGBT work founded by Adam Zane, director of Gypsy Queen. Productions include The Laramie Project and the UK premiere of The Laramie Project – Ten Years Later at The Lowry and the company has been touring secondary schools across the North West with anti-homophobia verbatim play Out/Loud. Other productions include Get Happy at the Kings Head in London.

‘Gypsy Queen’ will perform on stage at the Torch Theatre, Wednesday 23 May, 7.30pm.