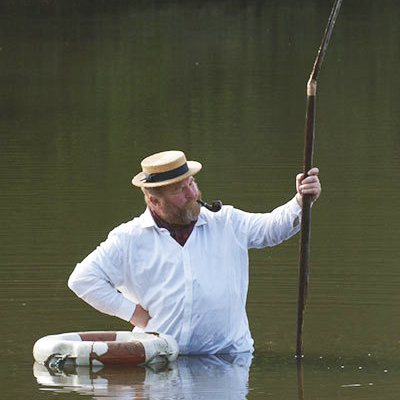 
After last year’s sell out success of Old Herbaceous, Kick In The Head Productions are back at the Torch Theatre, Milford Haven, on Wednesday 17 July, with a hilarious adaptation of Jerome K. Jerome’s classic humorous novel, Three Men in a Boat. The play sees a welcome Pembrokeshire return for Giles Shenton who plays the part of Jerome K. Jerome.

A quintessentially ‘British’ comedy masterpiece that has never been out of print since it was first published in 1889, Jerome K. Jerome's ripping yarn tells of the farcical misadventures of three gents (and Montmorency the dog) taking an ill-conceived boating holiday along the River Thames. The three men are based on Jerome himself (the narrator Jerome K. Jerome) and two real-life friends, George Wingrave and Carl Hentschel (called Harris in the book). The trip is a typical boating holiday of the time in a Thames camping skiff. This was just after commercial boat traffic on the Upper Thames had died out, replaced by the 1880s craze for boating as a leisure activity.

Three Men in a Boat has been widely acknowledged as influencing some of the British comedy greats including The Goon Show, The Goodies and Monty Python to Withnail & I, Bottom and The Mighty Boosh. The book, which has sold over a million copies, has been adapted for radio, television and cinema several times and in 2006, Griff Rhys Jones, Rory McGrath and Dara O’Briain recreated Jerome, George and Harris’ journey down the Thames in the series of the same name.

Come and join in the fun on Wednesday 17 July at 7.30pm as Giles Shenton expertly takes the helm and pilots you through the ridiculous tale of men behaving badly while messing about in boats. Tickets are on sale now and are available from the Torch Theatre’s Box Office on 01646 695267 or torchtheatre.co.uk

Three Men In A Boat, adapted for the stage by Simon Downing & Giles Shenton. Produced by Kick In The Head.

Tickets are on sale now and are available from the Torch Theatre’s Box Office on 01646 695267 or https://torchtheatre.co.uk/three-men-in-a-boat/