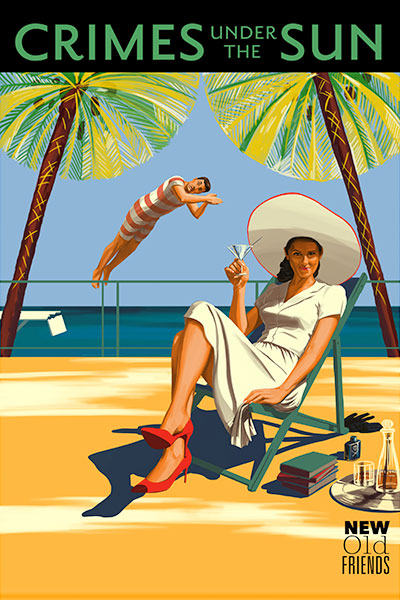 
“a mesmerising mix of murder, mayhem and laugh-out-loud comedy that leaves you exhausted just watching the action unfold” ★★★★ The Stage (on Crimes Against Christmas)

A secluded island hotel just off the English coast becomes a crime scene after a scandal inducing femme-fatale is fatally felled. All the guests on the island are suspects, but is everything here quite what it seems?

Inspired by Agatha Christie, 39 Steps, and film noir, welcome to a hilarious yet murderous trip to a classic English Riviera retreat. The show features the company’s trademark of just four actors playing multiple outrageous characters, and a plot that races along in a romp.

Coming to the Torch Theatre on Sat 14 April, 7:30pm, Crimes under the Sun is directed by James Farrell, a freelance theatre director who has worked on the West-End, at the Chichester Festival Theatre and the Royal Shakespeare Company.  James is the Artistic Director of Nameless Theatre and an Associate Practitioner at the Royal Shakespeare Company. Directing credits include: Pericles (Royal Shakespeare Company), Handlebards (National & International Tours), Animal Farm, Twelfth Night (Royal & Derngate), Mucky Kid (Theatre503), and The Sperm Monologues (E4 Udderbelly). He has associate directed on The 39 Steps (Criterion Theatre and National Tour) and Neville’s Island (Chichester Festival Theatre / Duke of Yorks) and was staff director on Good Night Mister Tom (West End & National Tour).

Celebrating their 10th birthday in 2018, New Old Friends are an award-winning theatre company dedicated to creating original comedy theatre, and run by husband and wife team Heather Westwell and Feargus Woods Dunlop. Previous shows include Silly Songs of Shakespeare, Anti-Panto! and Mate. In 2014 and 2015, New Old Friends took their adaptation of Anthony Horowitz’s The Falcon’s Malteser on two national tours and to the Edinburgh Festival Fringe, enjoying sell-out shows at the Pleasance and great critical acclaim. After a chance conversation via Twitter, the company met Lichfield Garrick’s artistic director Tim Ford and the “Crimes…” series began with Crimes Against Christmas in 2016, followed by Crimes on the Christmas Express and Home for Christmas. In 2017 they won the Creative Bath Award for Writing.