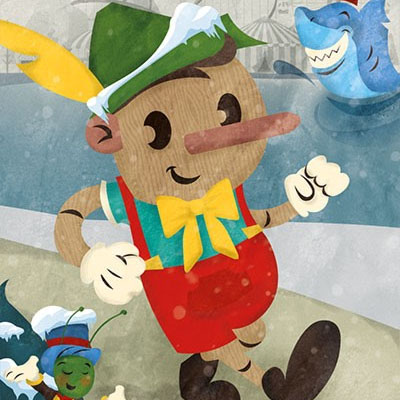 
The magical story of the Little Wooden Puppet who longs to be a Real Boy takes centre stage this festive season at the Torch Theatre, Milford Haven in this wonderful version of the classic childrens' fantasy story, 'Pinocchio'.

Brought to life in Geppetto's magical workshop, this fun packed show full of music, magic and laughter takes you on a fairy tale adventure to meet Stromboli the puppet maker, talking crickets, a mysterious gypsy and boys who turn into donkeys!

Written by the Torch Theatre’s Artistic Director Peter Doran and directed by James Williams, this enchanted story is sure to delight the whole family this Christmas.

We have a mix of new and familiar faces in this production, including Will Taylor, who made his Torch debut in last year's One Flew Over the Cuckoo’s Nest, in the title role, and of course, it wouldn't be a Torch Theatre Christmas show without Dion Davies! Here's the full cast:

Pinocchio runs at the Torch Theatre, Milford Haven from Thursday 20 December to Saturday 30 December at various times, including a BSL interpreted performance on Thursday 20 December and a relaxed performance on Saturday 22 December. Tickets start from £16.50 and can be purchased from the Torch Theatre’s Box Office on 01646 695 267 or online at https://torchtheatre.co.uk/pinocchio-2018/