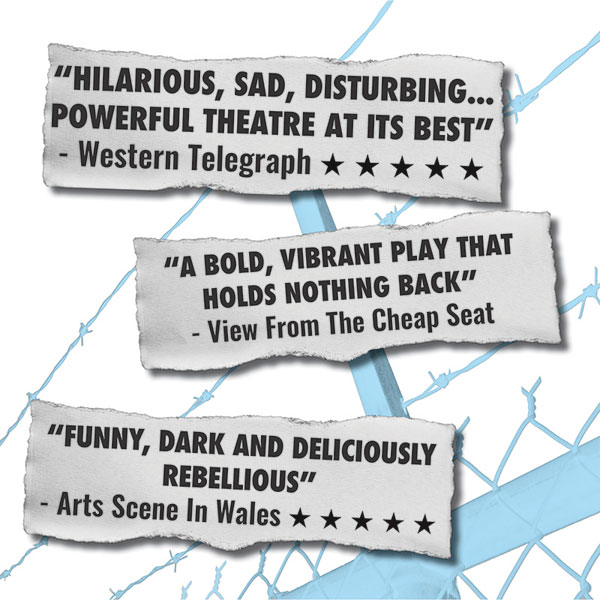 
Last Wednesday, the Torch’s long-awaited 40th anniversary production, Dale Wasserman’s One Flew Over The Cuckoo’s Nest (based upon the bestselling novel by Ken Kesey) commenced its 18-date run, proving an immediate hit with audiences and critics alike, receiving a well-earned standing ovation as well as some overwhelmingly positive responses from theatre critics and bloggers.

“I enjoyed every minute of the play and would thoroughly recommend it. Standing ovations from the audience on the opening night of this production bore testimony to the power of this performance.”

Writing for Arts Scene in Wales, Amanda Griffiths described the “funny, dark and deliciously rebellious” play as “a perfect choice for the Torch to showcase their talent and to push boundaries”, concluding:

“This 40th anniversary production of One flew over the cuckoo’s nest is a fitting tribute to an award-winning theatre. It takes a dark comic story, with a strong and difficult message, and using a talented cast, production and technical team showcases everything the theatre has to offer for an audience that has welcomed its productions for 40 years.”

As well as praising “Strong performances from the supporting cast ... with Will Taylor’s depiction of Billy being by far the strongest”, The Milford Mercury commended the show’s production values, singling out for praise Sean Crowley’s set (built by our technician Sam Wordsworth) and Ceri James’ lighting design:

“I was … wowed by the craftsmanship and attention to detail of the set and props, which gave the stage a feeling of depth; a feeling that we were seeing just a glimpse of the horrors that took place in the these places only decades ago.

Almost stealing the show was the lighting – casting a realistic, clinical morning glow onto the ward, and cloaking it in moonlight for the quieter, more reflective scenes.”

In his review for the Western Mail, Paul Boyle told readers: “This dark comedy will have you laughing and probably crying in the space of two hours”, going on to applaud the performances of the cast across the board (“the whole cast give a stellar performance”) and highlighting Andy Creswell as Chief Bromden, in what Boyle called a “masterful production”.

Theatre blog View From The Cheap Seat described this “wonderful, comical and hard-hitting stage adaption” of One Flew Over The Cuckoo’s Nest as “a bold, vibrant, at times violent play that holds nothing back in its depiction of the institutional abuse of power and the crossover into wider society."

The Pembrokeshire Herald’s Entertainment Correspondent Megan Gray-Power gave the play a glowing endorsement: “The Torch Theatre has excelled in creating an immersive production, which we at The Herald could not recommend enough”; commending Sean Crowley’s “impeccable” set design, the “sensitive yet humorous” characterisation of the inmates, and the performances of Will Taylor as Billy Bibbit (“Taylor pulled at the audience’s heart strings throughout the night… but his haunting scream towards the end of the production will be cemented into the audience members’ brains for weeks to come”) and Jenny Livsey’s Nurse Ratched (“The actress perfected her role, quickly forcing the audience to despise her character’s way of doing things.”)

Wales Arts Review’s Elin Williams wrote that “(Peter) Doran has found the perfect balance between comedy and drama. The performances are solid and combined with the incredibly effective set, this production is worthy of celebrating the 40th Anniversary of Torch Theatre.”

In an interview with playwright Meredydd Barker (‘Nye and Jennie’ ) on the website Get The Chance, Barker told interviewer Guy O’Donnell, "One Flew over the Cuckoo’s Nest at The Torch was ensemble work as good as I’ve ever seen."

Writing for Theatre in Wales, Tim Barrett said: “A fabulous piece of work. A hell of an achievement. A theatrical masterpiece”, commenting: “It is hugely satisfying seeing such a large cast on stage and there is just so much to see and enjoy in this performance one viewing is never going to be enough” before going on to say:

“Forget the film. Forget other productions of the play. Forget the novel (well, no, don’t forget the novel). This is the one. The only one. Standing ovation-tastic. Nobody in their right mind would want to bother seeing it again anywhere else after this. It’s simply that damn good.

The definitive production, the definitive performance, finally, of ‘One Flew Over the Cuckoo’s Nest’. And no: not on Broadway, not in the silly old West End, but… at The Torch Theatre in west Wales, in a little town on the windy west coast there.”

With mental health awareness a significant issue, reviewers touched on the relevance of Cuckoo’s themes and how the play reflects the changes in attitudes towards mental health since the play was first written, over fifty years ago. Joanna Sayers, Milford Mercury: “The Torch Theatre’s decision to highlight mental health as part of its 40th anniversary celebrations is an important one. One Flew Over The Cuckoo’s Nest is a reminder of how horrific mental health care was, and how far it has come… it is only right that this often overlooked subject is given centre stage.”

Liam McKenna, View From The Cheap Seat: “…this story is still as relevant in 2017 as it ever was in its critique of mainstream society’s struggle to accept those who don’t conform to the perceived parameters of normality. This new adaptation couldn’t have come at a more appropriate time.”

Megan Gray-Power, Pembrokeshire Herald: "Incredibly true to its time, the production was, at times, hard to watch due to its unfair treatment of the mentally ill. At the forefront of the play is the harrowing realisation that Cuckoo's depiction of the authorities' way of dealing with things was once the way things were for people living with mental health issues."

One Flew Over The Cuckoo’s Nest has also received stellar praise from our customers, many of whom have shared their impressions on social media. Here is just a small selection of the feedback we’ve received for this production.

“One of the great ensembles performances, Torch Theatre - Peter Doran I salute you.” -

“Best piece of theatre I've seen in a long time! Totally deserved that standing ovation and many more to come!”

“Torch Theatre worked Miracles with One flew over the Cuckoos nest , one of the best plays I have ever seen, absolutely brilliant”

“Truly blown away by #OneFlewTorch40 what an outstanding performance!! If you haven’t seen it, you bloody need to!”

“Absolutely outstanding production! Congrats to all the cast & crew!”

“Well worth seeing 'One Flew Over the Cuckoo's Nest' at The Torch Theatre. Fantastic acting. Great adaptation.”

"Well done everyone involved in the brilliant play One Flew Over The Cuckoo's Nest. Everyone must go and see it."

"A top class, professional play with a great cast, fantastic stage and all in Milford. This play could easily top the London Theatre Charts. A must see, support our local theatre.” – Colin Sharp, Mayor of Milford Haven

“Absolutely amazing.. Incredible performances from all of the cast... I laughed.. I cried and laughed again. Not to be missed.”

“Standing ovation and well deserved! The acting and set design was sensational!”

“So good, could watch it every night. Better than anything you would find on the TV at the moment.”

“Absolutely amazing, wonderful performance by all the cast.”

“Absolutely outstanding and worthy of a West End theatre.”

“One of the best I’ve seen in a very long time! Trying to round up the troops to go again!”

“Throughout the evening, the tension grew, and by about half an hour from the end, you could literally have heard a pin drop in the auditorium. By the closing scene, I could barely breath, and certainly couldn't look at anyone... silent tears running down my face.”

“So worth the money to see something as well produced and played as this.”

"Peter Doran squeezes every ounce of humour and agony out of this play, which just seems to resonate much more now for me in a time when such polarising views on so many subjects claim to be the right way forward. Make the journey to Pembrokeshire if you can to see this, you'll be glad that you did."

Have you seen and enjoyed One Flew Over The Cuckoo’s Nest? Share your feedback over on the Torch Theatre Facebook page! More of a tweeter? Tweet to @TorchTheatre and be sure to use the #OneFlewTorch40 hashtag!