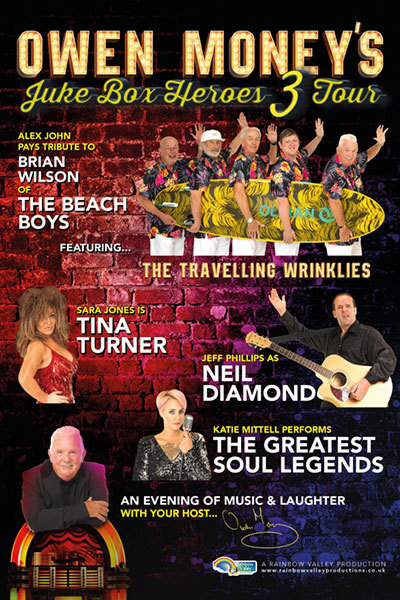 Joining Owen on stage is his fantastic band ‘The Travelling Wrinklies’ who will accompany some breathtaking tributes to some legends of the Music World.

Owen and the band will accompany the jaw-dropping vocals of Alex John as they reignite the innovative sounds of The Beach Boys.

Get ready to be blown away as Katie Mittell sensationally pays homage to the Greatest Soul Legends such as Aretha Franklin, Etta James and Nina Simone.

Jeff Phillips will take to the stage simply ‘as’ the legendary Neil Diamond.

‘We don’t need another hero’ but go on, one more!

Sara Jones explodes onto the stage with a fabulous portrayal of Miss Tina Turner.